Recently, my walking group visited a section of the Yarra Bend Park inhabited by bats, or to give them their correct title – Grey-headed Flying-Foxes. A large section of the trees bordering the Yarra River is thick with them. I’ve never seen so many in the one place before. 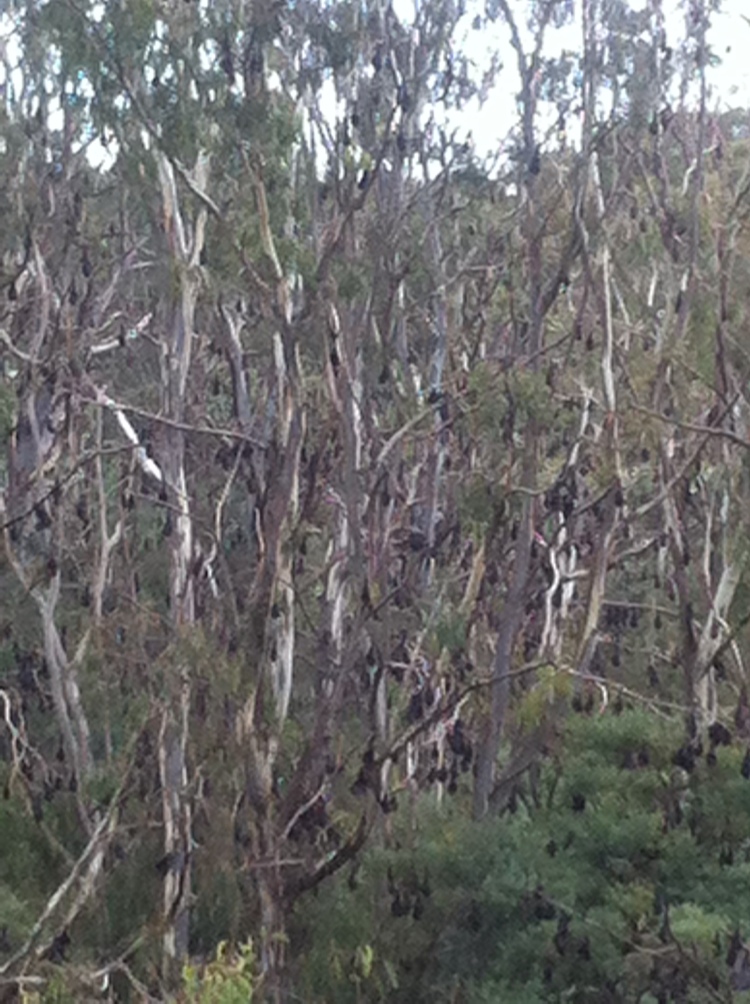 It’s difficult to capture the enormity of the numbers when I could only photograph a small group of the trees at a time, but according to The Australian Bat Society webpage, the numbers have reached as high as 50,000 in recent years.

At first glimpse, it looked as if the trees were full of crows, or ravens, but the noise gave them away. Even though most of them were sleeping, those still awake didn’t worry about keeping quiet. In a large group, they sound like parrots but with a higher pitch and a distinct screechiness. They’re certainly not the most considerate of neighbours. You can hear a recording of one on the following YouTube: https://youtu.be/pc1wUKIxwSQ

Now, imagine that sound coming from a few hundred bats to get an idea of what we were hearing.

The first bat colony to take up permanent residence in Melbourne established itself in The Royal Botanic Gardens in 1986. However, by 2000, their numbers had grown so large that they were causing significant damage to the garden’s heritage listed trees. Wildlife groups rose to the occasion and helped relocate them by making loud noises at dusk and dawn. The damage to the Yarra Bend trees is also obvious, but the constant new growth compensates for it.

Bats sleeping in a dead gumtree

It really is a sight to see and hear, so if you live in Melbourne, I’d recommend you visit and take a look. We plan to return at dusk one day to watch them wake and fly off on their nightly search for fruit, nectar, and pollen.

Yarra Bend Park is the largest area of natural bushland close to Melbourne’s centre, and it is easy to access the bat’s domain from The Bellbird Picnic area.

And for more interesting information about bats, go to the Australian Bat Society’s webpage.